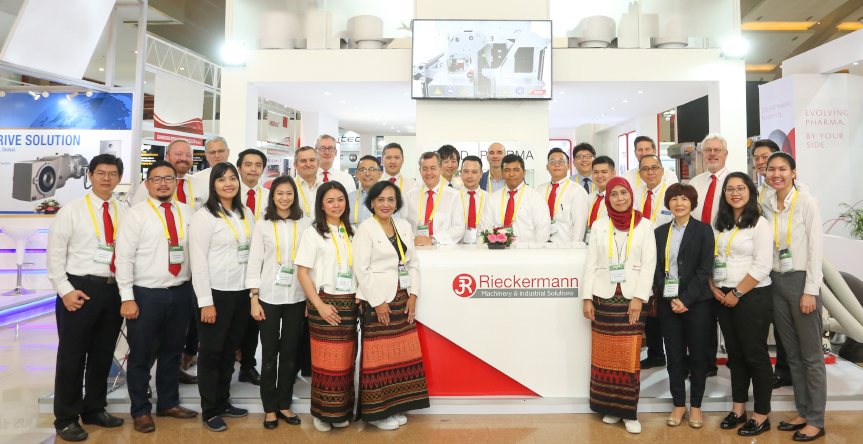 Rieckermann received the Best Stand Award for their booth during ALLPACK INDONESIA 2019, the best event for the processing and packaging in Asia. The award was presented by the organizer in recognition of the exhibitor with the best designed booth, which attracted the greatest number of visitors during the exhibition.

During the event, Rieckermann showcased the latest manufacturing solutions for the Pharma and Food industries and displayed several demonstration machines, which offered visitors the flexibility to physically view and experience the functionality and technology behind the machinery. Besides showcasing complete industrial solutions in packaging for Pharma and Food, Rieckermann also conducted two industry seminars on Pharma solid dosage manufacturing and Coffee solutions, which received a lot of interest from visitors of the event.

ALLPACK INDONESIA 2019 took place this year from October 30 to November 2 at the Jakarta International Expo in Kemayoran, Indonesia. This was the third year that Rieckermann had received Best Stand Award during ALLPACK INDONESIA, with the first two times being in 2012 and 2014. In 2016, they were also a recipient of the Most Innovative Award for their booth. MECHANICAL-BIOLOGICAL TREATMENT SEMINAR 2019
Scroll to top
rieckermann.com uses cookies to collect information about how visitors use the website. These cookies help us to provide you with the best possible online experience, to continually improve our website and to make offers tailored to your interests. By continuing to browse this site you are agreeing to our use of cookies.OkDenyPrivacy policy
You can revoke your consent any time using the Revoke consent button.Disable Google Analytics